Amiga on Steroids, Complete with Side Effects! 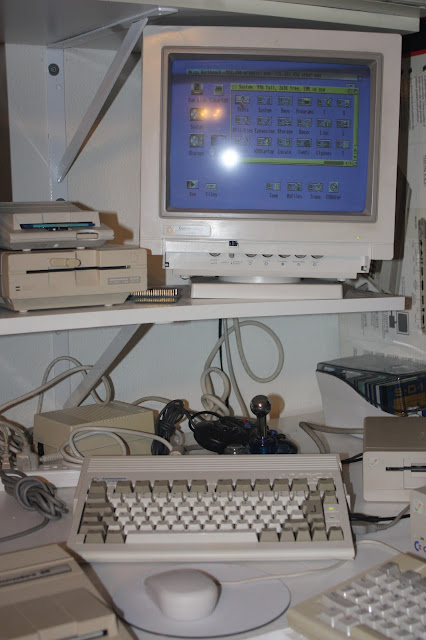 Nestled snug in the corner of my computer room is an Amiga 600.  It was put there for one purpose: as a quick and easy game console for classic Amiga titles like Lemmings, Street Fighter II, and whatever else I could find on floppy that worked.

This was fine until the day I decided to put one of those pre-configured flash-based IDE drives off eBay inside it.  The hard drive came with a program called WHDLOAD installed on it, along with around a hundred games.  I was captivated, but very few of those games actually worked, and I was told it was the machine's fault.  So first I upgraded it to the latest Kickstart ROM, then I gave it 4mb of Fast Memory in the belly slot, and finally another 2mb through PCMCIA.  None of it was enough.

Then I heard about the Vampire V2 CPU card.  It promised to solve all my problems with an 80+mhz 68040 emulated processor, 128mb ram, and an sdcard slot for extra storage.  For the money, it was the cheapest and fastest 680x0 based cpu expansion for any Amiga.

So I placed my order, waited several months, paid the bill, waited another month.  And then one day... 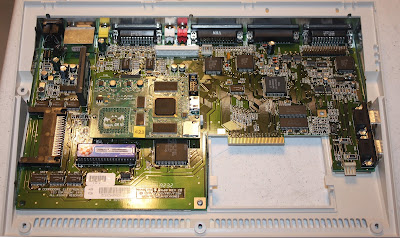 The package came with the card, two little plastic mounting legs, a Q-Tip, and alcohol swab.  I used the Q-Tip and swab to clean the contacts around the existing 68000 processor, and after some moderate but careful violence, was able to push the card into place and screw it down.  I then put a cheap 8gb sdcard into the card reader and hooked it back up. 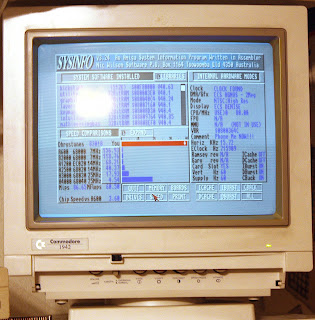 It booted right up, and a quick run of SysInfo showed that it was every bit as screaming fast as it promised to be.  I also ran AIBB, which contains numerous benchmark tests.  Generally speaking, it's screaming fast on CPU and integer intensive tasks, still Fast as Hell on Floating point tests, and (shockingly) slower than a 68040 (but still faster than a 68000) on graphics operations.

The sdcard was not recognized as a standard scsi device, so my first step was to discover, find, download, and install the latest drivers.  This took way too long to figure out.  Shipping the card with instructions on at least where to find drivers would have been nice.  Anyway, some time later, the sd card was partitioned and ready to receive data.  The process went something like this:
It only took a few megabytes of copying data onto the new partitions to discover my error: The cheap (slow) 8gb flash card I used wasn't cutting it.  The OS would constantly error out as if the device was no longer there. It would ask me to reinsert the volume as if I had removed it. Hitting retry would usually work, but that's not behavior you want out of fixed storage.  Using a  higher quality (faster) $20 8gb sdcard did the trick.

Another problem I discovered is that running a computer with a 68040 but no FPU (Floating Point Unit/Math CoProcessor) creates confusion.  The Vampire team promises a core update with an FPU in the future, but until then, certain programs are going to be a problem.  Thankfully, they are always non-Game programs. 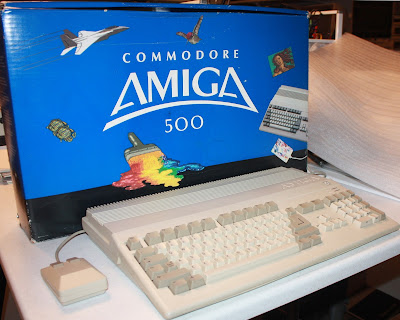 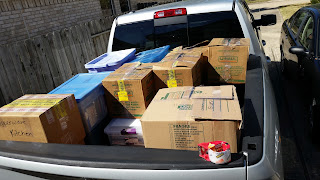 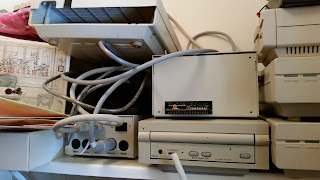 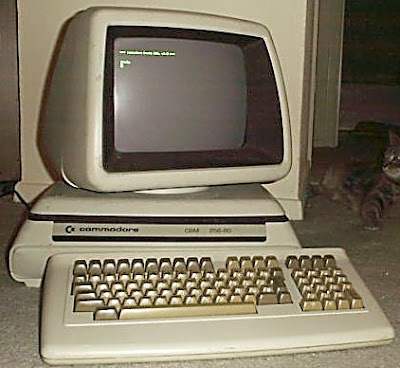 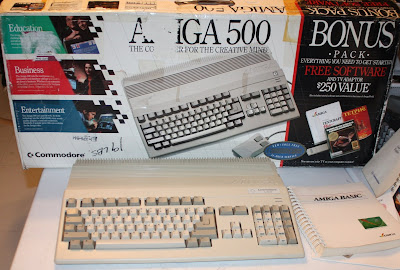 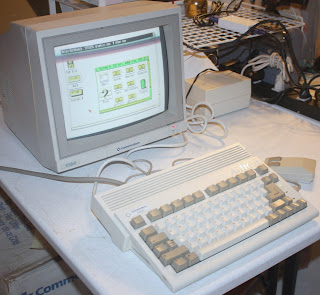 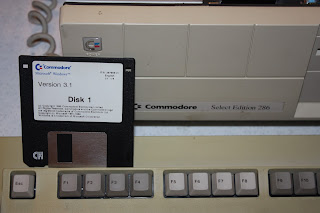 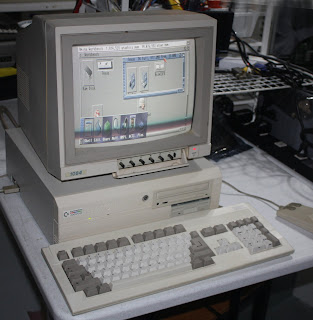 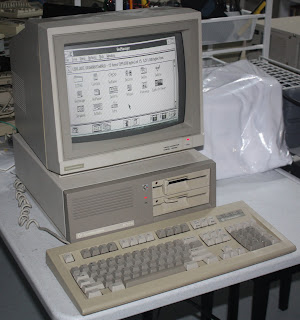 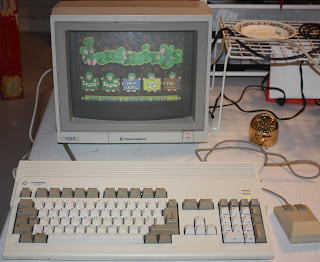 Of all the things in my collection, printers and monitors are the strangest.  They serve very narrow purposes and tend to all do their tasks in about the same way.  Of the two, printers are the strangest. Monitors can often be justified due to the non-standard video output of some computers, especially the RGBI of the C128, the Chroma/Lumina of the C64, and the 15khz signal from the Amigas.

Printers, however, just print.  They take paper with tiny holes along the side, onto which they deposit letters by pressing a shape against a piece of cloth coated with ink.  And they are all either IEEE-488, IEC, or GPIB (Parallel). 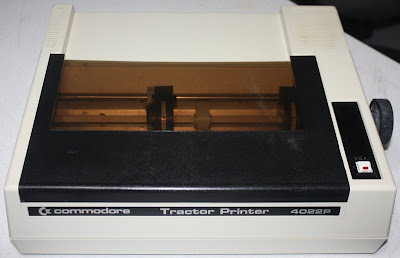 This is a Commodore 4022P IEEE-488 printer.  It has enough processing power and memory to handle the IEEE-488 communication with the computer, and it prints.  It does not scan. It does not fax.  It has no lasers or jets of ink.

Instead it takes, as I mentioned earlier, a piece of cloth dipped in ink and rolled up in a continuous loop inside this plastic casing.  Much like the printers of today, every printer takes a slightly differently shaped ribbon cartridge, allowing the manufacturers to sell the printers at a loss and make it up on all the ribbon sales.

This particular model was made for the European market, having an AC 220V power input.  Inside is a step-down transformer and some sort of rectifier circuit to provide the DC current needed by the chips and paper motor inside.  The data port is, as mentioned earlier, IEEE-488, meaning it was meant for either the Commodore PET, CBM or CBM-II line of computers.


Posted by Bo Zimmerman at 2:41 PM No comments: