This is a continuation of the alterations I'm doing on my Commodore 128D.

In the last post, I described the internally mounted uiec/sd.  All I had left was to mount the Forward and Backward buttons, but the buttons had not yet arrived in the mail.  Well, today they arrived. 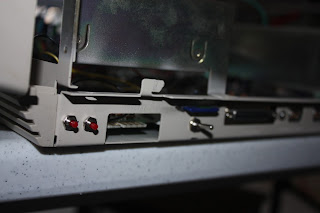 I figured this connection would be relatively easy, and it was, except that I could not, for the life of me, discover instructions on the internet as to whether the button should give +5 to the F/B lines, or Ground them.   Even the uiec Wiki was no help! Luckily, I had purchased an extended daughterboard from Retro Innovations at one point, and was able to use my multi-meter's continuity checker to determine that the correct answer is Ground. 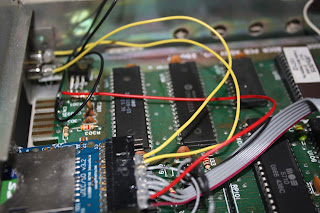 The only remaining task in the computer upgrade was the Second SID.  This would actually be my third or fourth second-SID implementation.  The others had gone into my flat Commodore 128, and several different breadbox C64s.  Those were all either piggy-backed implementations, or custom daughterboards with wires spaghettied all over.  They aren't pretty, but they all still work.

Some time ago, I had purchased a couple of SID2SID boards, hoping it would save me a lot of trouble, while also giving me a nice clean-looking implementation.  However, I also have a SuperMMU board which hangs right over the SID, leaving no space for ANYTHING to be done there.  Therefore I ordered several precision sockets, in order to Lift the SuperMMU 1/3 of an inch further off the board. 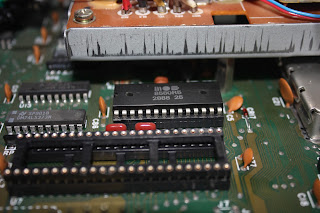 Well, those sockets arrived today, and seem to do their job.  However, I discovered another problem.  One of the mounting legs on the C128D power supply obstructs the SID2SID board from lining up correctly.  In the picture above, you can see where the SID is, and where the power supply leg sticks up.  The picture below shows how and why the board does not quite fit underneath the power supply. 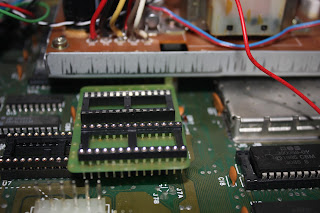 I considered trying to shave the board a bit, but wasn't sure how that would end up, and besides, some experimentation convinced me that there wasn't enough head-space under the power supply either for the board, socket, and then chips on top of that.

My next thought, which I still might go with, is to basically make an extension cable for the SID slot that would allow the SID2SID board to sort-of dangle somewhere else on the board. 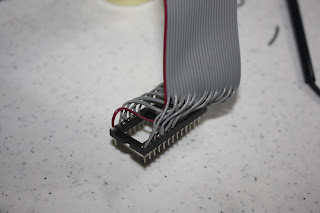 However, while I'm almost done with the cable, the thought of that daughterboard rolling around inside the case has been eating at me.  Perhaps I could finish this cable and glue the board down somewhere -- perhaps on top of the RF box.  However, I might also just bite the bullet and do another piggyback implementation. :/

I'll have the answer in the conclusion.

Posted by Bo Zimmerman at 10:13 PM No comments:

My main Commodore 8-bit computer since about 1990 has been a Commodore 128D. I've used it for all my programming, for my productivity, and for my gaming. I've always tried to keep it decked out. Until a few months ago, it had a 20mhz accelerator (SuperCPU) with 16mb ram, a ram drive (RAMLink) also at 16mb, network interface (64NIC), a 2mb ram expansion unit, JiffyDOS for the internal 1571, cooling fan, SuperMMU, a parallel printing interface, and several floppy drives, including a 2gb hard drive.

This all changed a month or so ago when a lightning strike ran along the network cabling in my house, affecting network-enabled electronics wherever it went. One of the stranger effects was to burn out the Character ROM IC in my C128D. Replacement was easy, but required unhooking all that stuff to replace the chip. Well, while I was in there, I decided the computer needed more decking out. In the queue are the following:

1. JiffyDOS kernal for the computer proper, so it no longer relies on the RAMLink or SuperCPU for JiffyDOS support.
2. Switchable Servant/Super 81 Option ROM
3. Internally mounted uIEC/SD, with externally accessible card slot, forward/backward switches, and...
4. A switch to disable the internal 1571 drive, switching IN the uIEC/SD instead.
5. Second 8580 SID chip with disable switch and external audio jack. 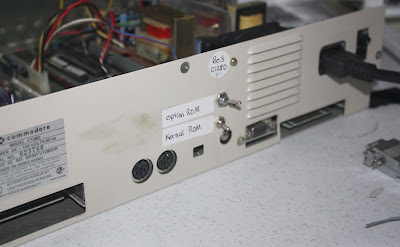 Well, that project is well underway. The JiffyDOS kernal and switch are installed, as is the option roms and their switch. 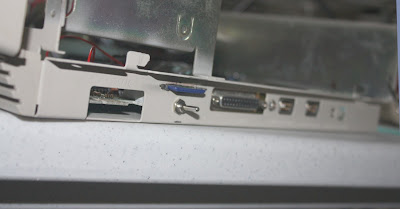 The uIEC/SD and 1571 switches are mounted, as is the uIEC with externally accessible card slot. Most people try to mount these on the front of the case, but I felt like cutting the front affect the aesthetics, so I opted for the side. The forward/back switches are on order, and will go in the spot forward of the datasette port there. 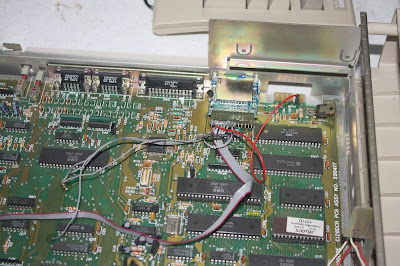 Here you can see the uIEC mount from the other side. I used some of that JB-Weld Plastic Repair Apoxy, which hardens into a plastic, to secure the unit in place. If I'm careful, I'm sure I can remove the uIEC/SD in the future if I wanted, and then screw it back into the apoxy. 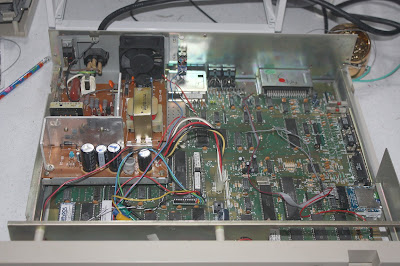 Here's an overview. I've yet to start on the second SIDs -- to do that, I need to raise the SuperMMU up about half an inch, so I have some 40 pin socket on order to do that. In the meantime, I'll get started on the second SID wireing, and putting in the switch and audio jack, so it can all just be plugged in when it arrives.