Commodore PC Desktops are not the only x86 computers with bios batteries I worried over recently.  Without power to the BIOS ram, Commodore PC laptops lose their hardware settings and refuse to boot up.  Fixing this problem became my next concern. 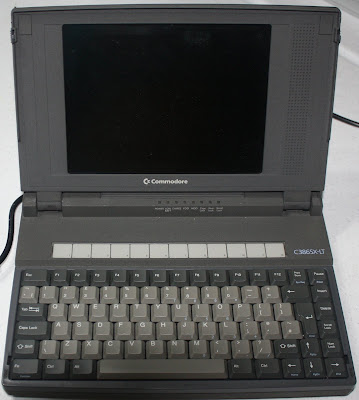 First up was my C286-LT and C386SX-LT.  These computers were, in some ways, the easiest to replace the batteries in. The battery was a 3.6V non-rechargeable AA-sized battery.  Moreover, these computers have an externally accessible battery port, which made my life much easier. 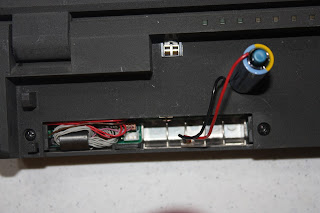 Most AAs are 1.5V, so it took awhile to get the correct ones on order.  Also, the battery that was in there had the special connector lead required for the computer board already built in.  And, importantly, the battery was coated in plastic to prevent shorting itself against the internal battery space.  Turns out that entire space where the battery goes is grounded, so this was important.  Lastly, because the battery had its own leads built in, it didn't need to fit very snugly in its place, which would become important when trying to figure out how to get a new battery in there. 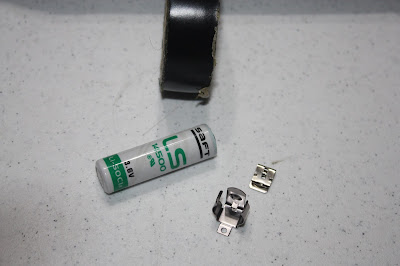 The first thing I tried was soldering those wires directly to the new battery.  The solder would not hold.  So then I Dremel-tooled away some of the coating on the battery metal to see if I could get a better grip.  I ruined a battery that way, don't try it.

Eventually I came around to what you see above.  One side, for ground, hugs the batterys negative end and has a clip on which to solder the black wire.  The other is actually a clip-on that fits neatly over the one of the ends of the battery space.  Since the entire space is !!grounded!!, and I needed that end to hold the positive charge, I used some black electrical tape over the battery area, and then put the positive-end clip over the electrical tape. 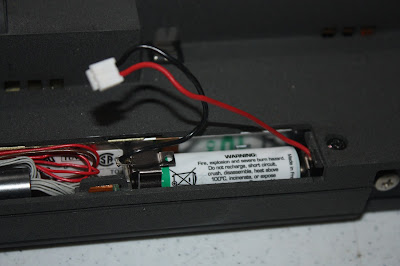 The combination was enough for the snug fit and secure contact on the positive side.  I replicated this process twice, once for the 286 and once for the 386, and now, a happy BIOS.

I broke it open, perused it with my magnifying glass, and to save my life could not find anything resembling a battery.   I suspect it relies on the main laptop battery for constant power, but well, time to move on. 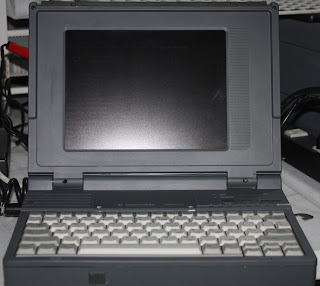 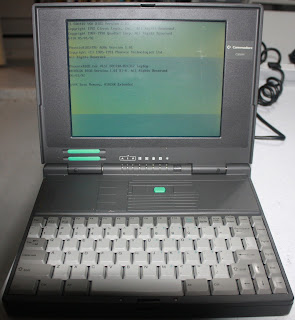 The battery in this one was extremely inaccessible.  Five screws and an hour of painful prying was required to get the top off this damn thing.  And then, inside, I found a strange 4.8V rechargeable chain of batteries molded in plastic with custom wires velcroed between the hard drive and the floppy drive. 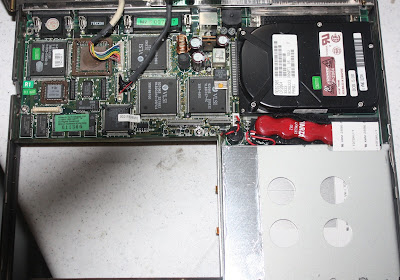 Replacing this one required purchasing numerous 1.2V rechargeable button-sized batteries.  Sounds easy, right?  Well, scale and dimensions aren't always mentioned in web stores.  Sometimes you order a battery that looks identical to the one you want to discover it is exactly 3 times the size and weight of the one you have.  <sigh>  Well, it only took a month, but eventually the correct batteries arrived from China. 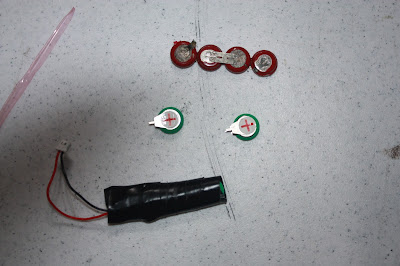 Pictured above is the original battery chain, after unwrapping.  Below that are some spares of the new batteries from china. Those cute little nubbins on them made it possible to solder them into their own new little chain and then solder on the wire leads.  At the bottom was the final produce, wrapped snugly in electrical tape to help with any future leaking.

With all the laptops now safely remembering their bios settings, it was time to move on to the Amigas.  A few more Commodore PC desktops will be arriving next month to the collection, which I'm sure will interrupt this process, but well, a Commie-fans work is never done!

Posted by Bo Zimmerman at 11:22 PM No comments:

Over the last few days I had occasion to go through a bunch of old VIC-20s from the George Page collection.

Most of them have scuffed cases, missing keys, boards covered in rust, and didn't boot at all.  I figured I would go through some of them to see if I can scrounge some working parts.  I also pulled out a few reference working VIC boards to do the testing against.  These are pictured below. 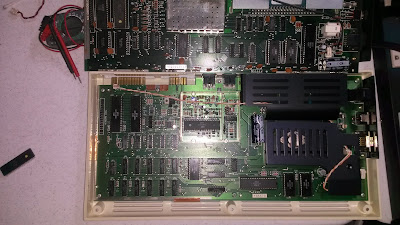 In the course of testing the various 6560 VIC-I chips (the video chip that the computer takes its name from), I made an amusing discovery.

The discovery was that, even in the exact same board, different VIC-I chips produce different tints in their basic colors.  This is something I expect from TVs and Monitors which, after all, have a Tint knob.  But from a digital component deterministically manufactured?  A shock!  I'm sure many of you olde VIC fans already knew this, but I'm still fairly new to this computer, compared to some of the other Commodores, so it was a surprise.

Below are some of the colors I observed. ++NOTE: these images were snagged off the net for illustration purposes only... 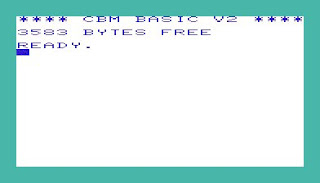 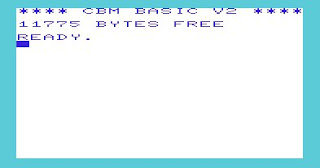 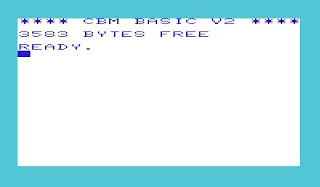 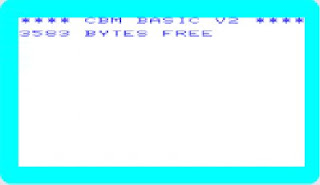 Another amusing discovery was how resilient the VIC-I chip is.  Even on the worst condition boards, where CPUs, VIAs, and ROM chips had all met their doom, not a single solitary VIC-I was defective. :)

While I was working on this, I made the sad discovery that the 6581 SID (sound) chip in my main breadbox Commodore 64 had gone silent.  In my experience, when a SID goes bad, it goes All The Way BAD.  And that's what happened to me.  A replacement was necessary.

I have a nice selection of pull-spares in my parts cabinet, so I wasn't worried.  But I decided to dig into a sealed bag of SIDs I purchased off eBay 7-8 years ago.  They were sold as a group, and most appear to come from the same manufacturing batch.  All the chips were pushed into a pin-protection mat, and the static-bag was still unopened.  I cut the bag open and began testing them.  You can still see some thermo-compound on some of them -- that's my doing; they were pristinely clean with perfectly straight pins when I opened it. 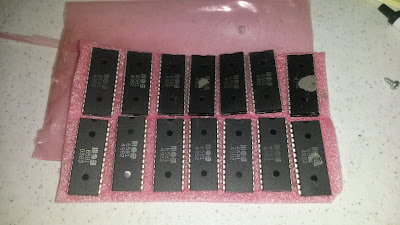 I was shocked to discover that the first chip I put in did not work correctly.  I was even MORE surprised at the WAY it did not work.  As I mentioned above, when a SID goes bad, it goes All The Way.  But this chip was not silent, but FLAWED; it did not sound right.

Moreover, as I tested the chips one after another, I discovered that the same was true of all the chips.  Each one made sound, but the wrong sounds.  Some had missing voices.  Some had loud noisy interference.  Some had broken waveform generators.  None were all the way broken, but all were flawed.  I was robbed, and robbed in a way I didn't expect.  Were these manufacturing defects I purchased?  Pulls of flawed chips from an old repair shop?  Who knows.  Watch the video below to see what I found.

So, in the end, I had to dig into my working pulls, and my beloved breadbox now has its voice back.

Posted by Bo Zimmerman at 1:17 PM No comments:

A Tour Around the Lab

While perusing the web the other day, I happened upon a beautiful panorama of Yosimite Valley and it made me wonder how those are made.  Some quick googling made it seem fairly simple at first.  Take lots of pictures, combine them into one huge panorama picture with an editor program, and then, for a video, clip the picture into frames and recombine them as a video.

In the end, it took something like half a dozen programs and tools, with perhaps 2 hours of combined processing time on my PC, to produce this tour around my home away from the rest of my home: My Commodore Lab: